The Devil Is A Woman – Hollywood seems to have known this for some time. Perhaps it is our Western Judeo-Christian heritage with it’s misogynistic imprinting that has left us with a pre-formed suspicion of the Woman-with-the-Serpent. 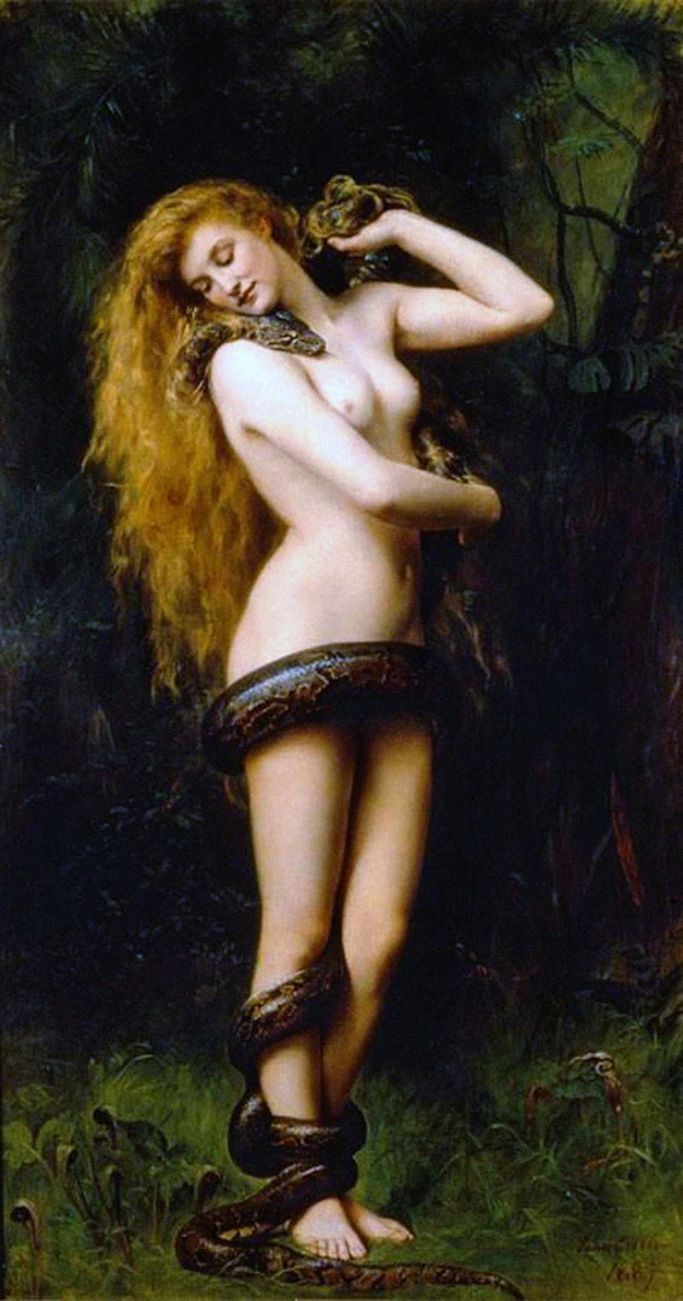 Seductress, Temptress, Witch, Murderess, Madwoman, Child-Snatcher… what causes this particular archetype to rise with such horrific force – like a primitive shadow from the collective unconscious – into our cinematic plays of shadow and light? Women have often been among the most numerous and the most devoted of the Devil’s servants. Though we would’ve enjoyed seeing Marlene Dietrich celebrate a Black Mass in a devilish thriller directed by Hitchcock, that remains a lost fantasy. It has really only been since the 1960’s that we’ve seen some celluloid Femme Fatales with a true sulphuric sense. 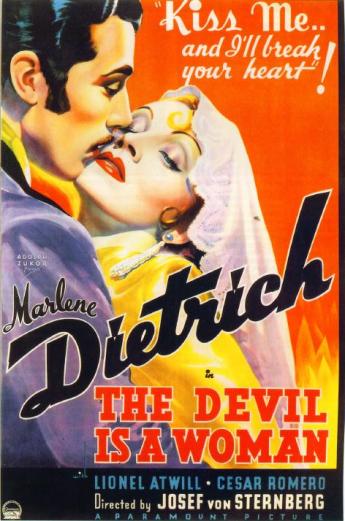 Hollywood has always known: The Devil Is A Woman (1935)

We have constructed a list (in vaguely chronological order and by no means exhaustive) of Cinematic Diabolical Dames deserving of recognition for the characters they brought to wicked life. They can both delight and disturb us, and they often have some of the best lines in films. These women are really in touch with their dark sides. Let’s celebrate Our Ladies In Hades.

Note: We were unsure whether to include the Possessed to our list as, while they may be human, they are not entirely themselves, so to speak. Therefore we decided not to include the notoriously infamous  Regan MacNeil / Pazuzu character from ‘The Exorcist,’ but we did include the less widely known Sister Jeanne from ‘The Devils.’ ‘Carrie’ White’s mother could be added because her extreme Christian religiosity makes her act evil… but let’s just accept that she is a psycho. We’ll try not to get complicated. Enjoy!

As an actress, Barbara Steele deserves special mention because of her bewitching presence amongst Horror Cinema’s tortured and lost souls. Her dark beauty still provides a template for gothic divas today. We certainly include her as the vampire witch princess Katia Vajda/Princess Asa Vajda from the influential ‘Black Sunday’ aka ‘Mask of Satan’ (1960) directed by Mario Bava, which is saturated with Gothic atmosphere and creepy effects which are still, well… effective! 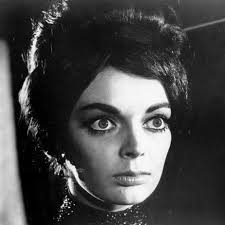 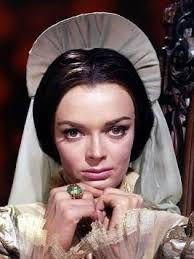 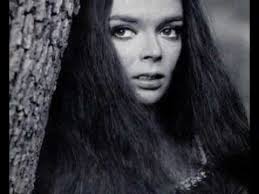 In ‘Curse of the Crimson Altar’ aka ‘The Crimson Cult’ (1968), which also features Christopher Lee and Boris Karloff, Barbara Steele plays Lavinia Morley who leads a witchcraft cult. She also appeared with Vincent Price in ‘The Pit and the Pendulum.’ We could go on listing her devilish films and her appearances in Dark Shadows but we hope you will discover her magic for yourself if you haven’t already had the pleasure. 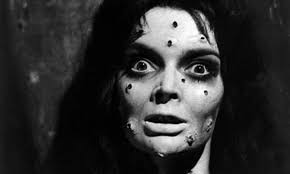 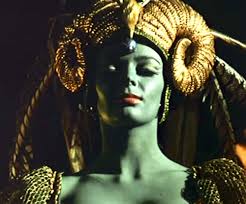 Sister Jeanne of the Angels in Ken Russell’s THE DEVILS as played by Vanessa Redgrave      An excellent performance in an excellent film. Sister Jeanne is a hunchbacked  Ursuline nun with a beautiful face in 17th century France. We watch in horror as the good nun and her repressed sisters – tormented by both fear and desire – become possessed by some really sinister Devils, namely the Church and State.

Mrs. Blaylock from ‘THE OMEN’ (Billie Whitelaw – original [1976] & Mia Farrow – remake [2006])  When Mrs Blaylock arrives to be the nanny for young Damian Thorn we feel certain there is something a little bit off about her, though nothing obvious at first. Is she human? Is she a demon sent from Hell? What is certain is her devotion to her young charge. Those feral eyes that appear through a sheer layer of gossamer nightgown as Katherine Thorn attempts to dress herself in the hospital, like a shark steadily approaching a drowning swimmer… Heaven help us!

Although we don’t care much for flawed remakes or sequels, we must give the Devil Her due. Mia Farrow accepted the stunt casting for The Omen 2006 reboot which, in a deft marketing ploy, opened in America on 6-6-’06. We were present for the event at a packed theater in Orlando when, at the opening of the film just as the opening credits were starting to roll, the celluloid burned in the projector – causing a sizzling psychedelic suppuration to spill across the movie screen. One nervous young woman of color exclaimed that this film was evil and possessed by the Devil’s power and quickly exited the theater with an amused and peeved date following her out. They never returned. It was a clever move to have Mme Farrow play the Antichrist’s guardian as she is so well known for ‘Rosemary’s Baby’. Her sweet portrayal of Mrs Blaylock truly makes the remake darkly-delightfully watchable. 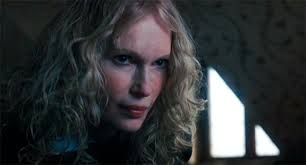 Mia Farrow in The Omen reboot.

Mrs. Ann Thorn in ‘DAMIEN: OMEN II ‘     Lee Grant is believable as a devoted stepmother to two young men. Her reactions to the drama around her feel genuine so we must admit she shocked the hell out of us the first time we saw this film. Her final treacherous move just before delivering her lines – which are legendary in Satanic Cinema – (“Here’s your daggers!! ….I’ve always belonged to Him!”) left more than one pair of jaws agape. Nobody saw this ending coming until it was too late.

Lee Grant as Ann Thorn prepares to skewer and barbecue.

Charlotte Rampling as Margaret Krusemark in ‘ANGEL HEART’    Sophisticated,  tasteful  and dignified, Margaret Krusemark is one classy dame, but her unusual profession and her taste in jewelry and home decor let us know that she is, in no uncertain terms, into more than just star-gazing and black magic. Tis pity she has a criminal connection with old heart-throb Johnny Favorite, though a special kind of Valentine will see them reunited. 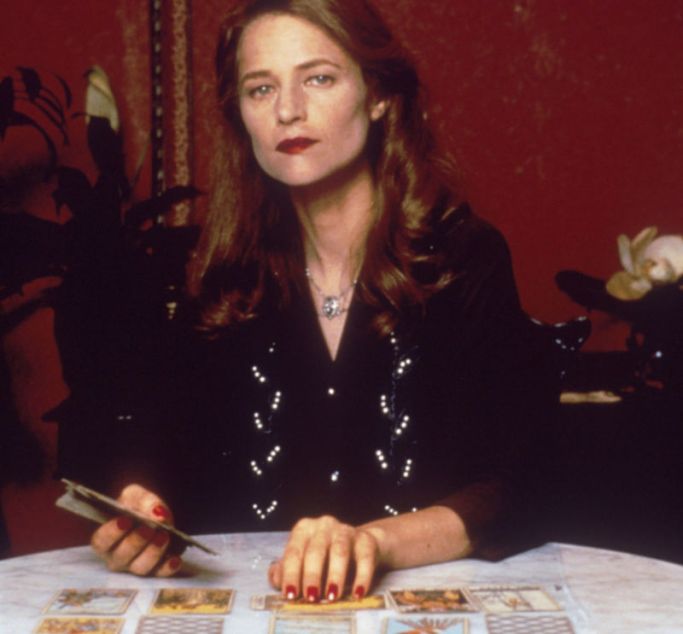 “I don’t think you’d like what I see in your future.” 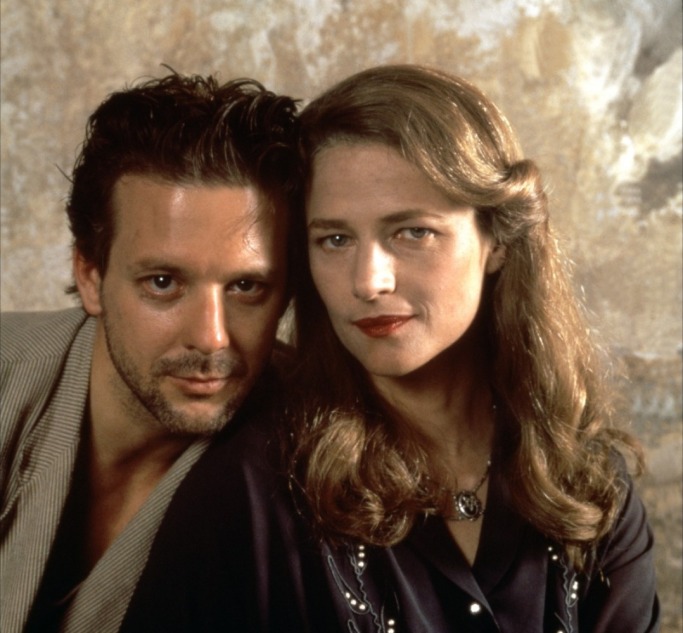 ‘Hellraiser’ & ‘Hellbound: Hellraiser II’   Clare Higgins as Julia Cotton & Female Cenobite    There is no mistaking Julia Cotton for a sweet hausfrau. This icy woman is frigid with her dull husband but fiery-hot and passionate with his brother Frank! In the first film she is the Wicked Stepmother, in Hellbound she emerges as The Evil Queen. No doubt she is on the highway to Hell. Her desires and cruelty should mark her high (or should we say Low?) on our list, ranking her one of the true Queens of the Damned! A woman who knows what she wants and will stop at nothing to get it! 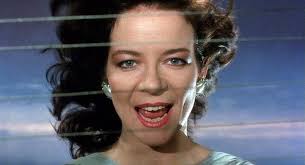 While we are in Hell(raiser) we may as well pause to genuflect and offer an orison to the Female Cenobite. This creature is unique in Horror cinema. Though other female cenobites have followed since the first two films in the series, she causes us to cringe with her taste for flesh and pain. Two separate actresses portrayed the female cenobite in the first two films. In the first Hellraiser the Female Cenobite was played by Grace Kirby who also happens to be Clive Barker’s cousin. In Hellbound, the role is played by Barbie Wilde who has authored some fiction which you who are reading this should check out. The Hellraiser themed short story collection Hellbound Hearts (2009) contains a backstory she wrote for her Female Cenobite character titled Sister Cilice which we highly recommend. 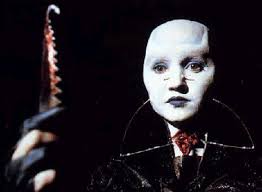 You may also enjoy reading ‘The Venus Complex’ by Barbie Wilde 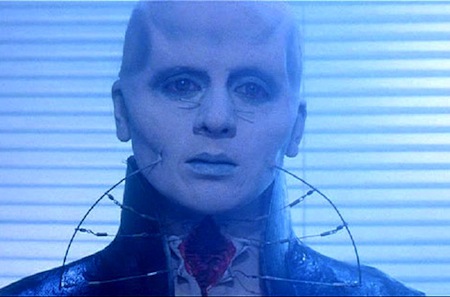 ‘The Ninth Gate’    Emmanuelle Seigner as “The Girl”, or as we prefer to call her The Mysterious Familiar Demoness. Part Succubus, part guardian daemon, this mysterious creature is ever unperturbed, has a great sense of timing, and is almost playful with Johnny Depp’s character… as a cat is with a mouse. She is fierce in the film’s ….umm, fiery climax.

Ms Seigner is married to director Roman Polanski who directed The Ninth Gate and is famed for his contemporary Satanic masterpiece ‘Rosemary’s Baby’.

‘Rosemary’s Baby’ How can we NOT mention lovable old Minnie Castevet ?- With a whiff of Tannis root perfume this crass character has a sense of style unsurpassed in Satanic Cinema. This nosey neighbor will creep you out even as she attempts to creep into your heart. Ruth Gordon‘s portrayal of a hip geriatric witch from Manhattan’s Upper West Side won her a well-deserved Oscar for Best Supporting Actress, winning perhaps the highest recognition of our sister Satanistas in Cinema – ever! Don’t be fooled by this harmless looking old lady! 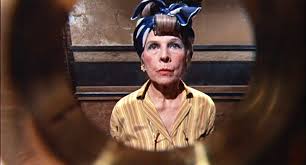 And the 2014 ‘Rosemary’s Baby’ TV remake with Carole Bouquet as Margeaux Castevet . Wiser heads must have prevailed at the studio – knowing the impossibility of even attempting to match Ruth Gordon’s flawless portrayal as Minnie Castevet – they instead took a more continental direction for the character with the sleek and sophisticated Carole Bouquet. We are certainly in praise of the older woman when speaking of the ladies Castevet. 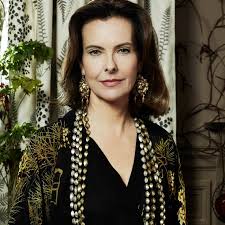 Mrs Ulman from ‘House of the Devil’  played by Mary Woronov    Creeps us out of all proportion to her time onscreen. Effectively evil in an understated way that is rarely accomplished in cinema these days. Hers is a throwback to those good old Omen days; as if Mrs Blaylock had survived and relocated to America in the 80’s. Mary Woronov has led a fascinating acting career through Warhol’s Factory, Punk, off-Broadway theater and numerous appearances in Cult and Horror and genre films and TV.

In Rob Zombie’s ‘The Lords of Salem’  (2013)     We get several witches worth their cinematic salt! Besides Sherri Moon Zombie as Heidi La Rock / Adelaide Hawthorne, we also get to savor Judy Geeson as Lacy Doyle, Meg Foster as Margaret Morgan, Patricia Quinn as Megan, and Dee Wallace as Sonny. A veritable coven of conniving women who usher an unsuspecting Heidi through a metaphysical mental metamorphosis to create a perfect vessel of demonic vengeance. We don’t view Heidi as demonically possessed, though she may certainly be classified as demonically obsessed.

Sherri Moon Zombie as Heidi in The Lords of Salem

You get your witches’ worth in this Rob Zombie flick! The Three Witches: L to R: Patricia Quinn, Judy Geeson and Dee Wallace. 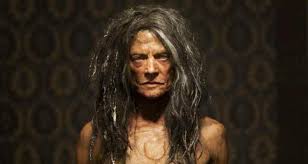 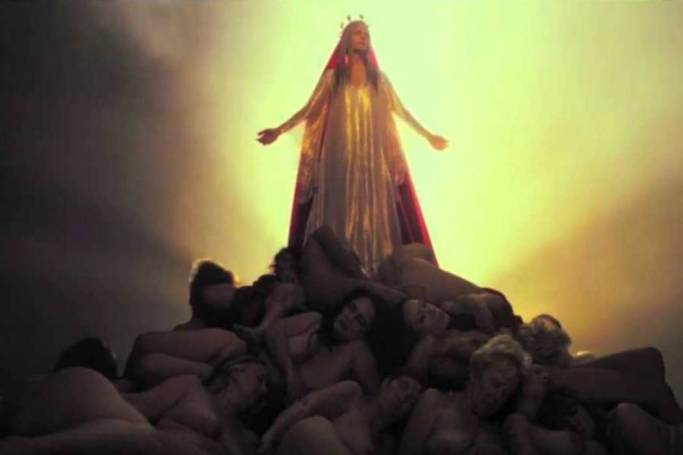 The Assumption of Maria is Satanized into the Descent of Heidi 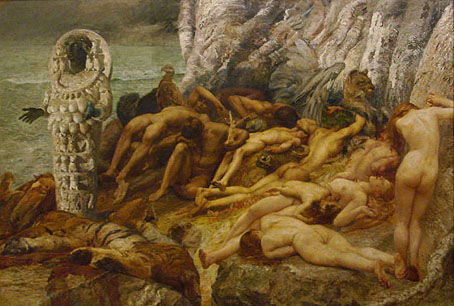 ‘Diana of Ephesus and the slaves’ (1893 – 1898),  by the severely under-appreciated Italian symbolist painter Giulio Aristide Sartorio.  Was Rob Zombie inspired by this painting? 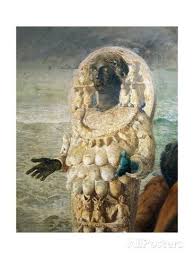 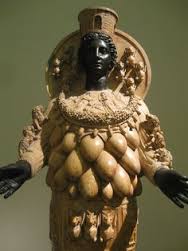 The cult statues of the many-breasted Ephesian Artemis / Diana were often rigged as fountains in Her ancient temples. These fountains would spew forth milk from the nipples at the climax of the celebrations. These temples were vandalized and desecrated by Christian zealots centuries ago but some images remain. The Goddesses have been demonized since that time, but fortunately She is in recovery.

We could go on and on with this list, and perhaps we will add others as time permits. We can certainly include more. If you think of some we have missed that really deserve to be added in here please let us know. 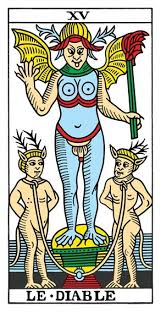